The groundbreaking ceremony was held on September 23, 2010 (see photo below), for the extension of a taxilane at the Fort Morgan Municipal Airport. City officials, members of the City's Airport Advisory Board, and other local dignitaries gathered at the airport to kick off the project. Planning for the expansion and improvement of the City's airport has been ten years in the making, but pushed forward in the past year by Community Development Director David Callahan.

Extension of the taxilane will allow for the construction of new hangars, which will fulfill interest shown for years from those traveling from the Front Range area of Colorado to the northeast part of the state. According to Director Callahan, the taxilane extension will be about 900 linear feet and 25 feet wide, and will accommodate 15 to 20 new hangars, depending on their size. It is another step in implementing a long-range airport improvement plan that is to eventually include a new, longer, and relocated runway.

The cost of the taxiway project is $270,000, which includes engineering, project management, and construction. Federal Aviation Administration funding will support 95% of the cost and 2.5% will be provided by State funds. The City's 2.5% share will cost less than $7,000. Armstrong Consultants Inc. of Grand Junction, Colorado, will engineer the project and the construction work will be completed by Mountain Constructors Inc. of Platteville, Colorado.

The project completion date is estimated as October 13, 2010. 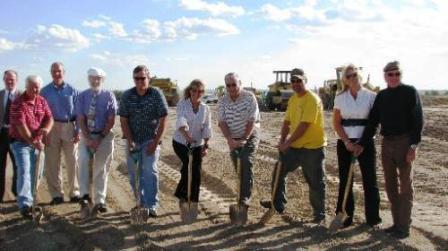